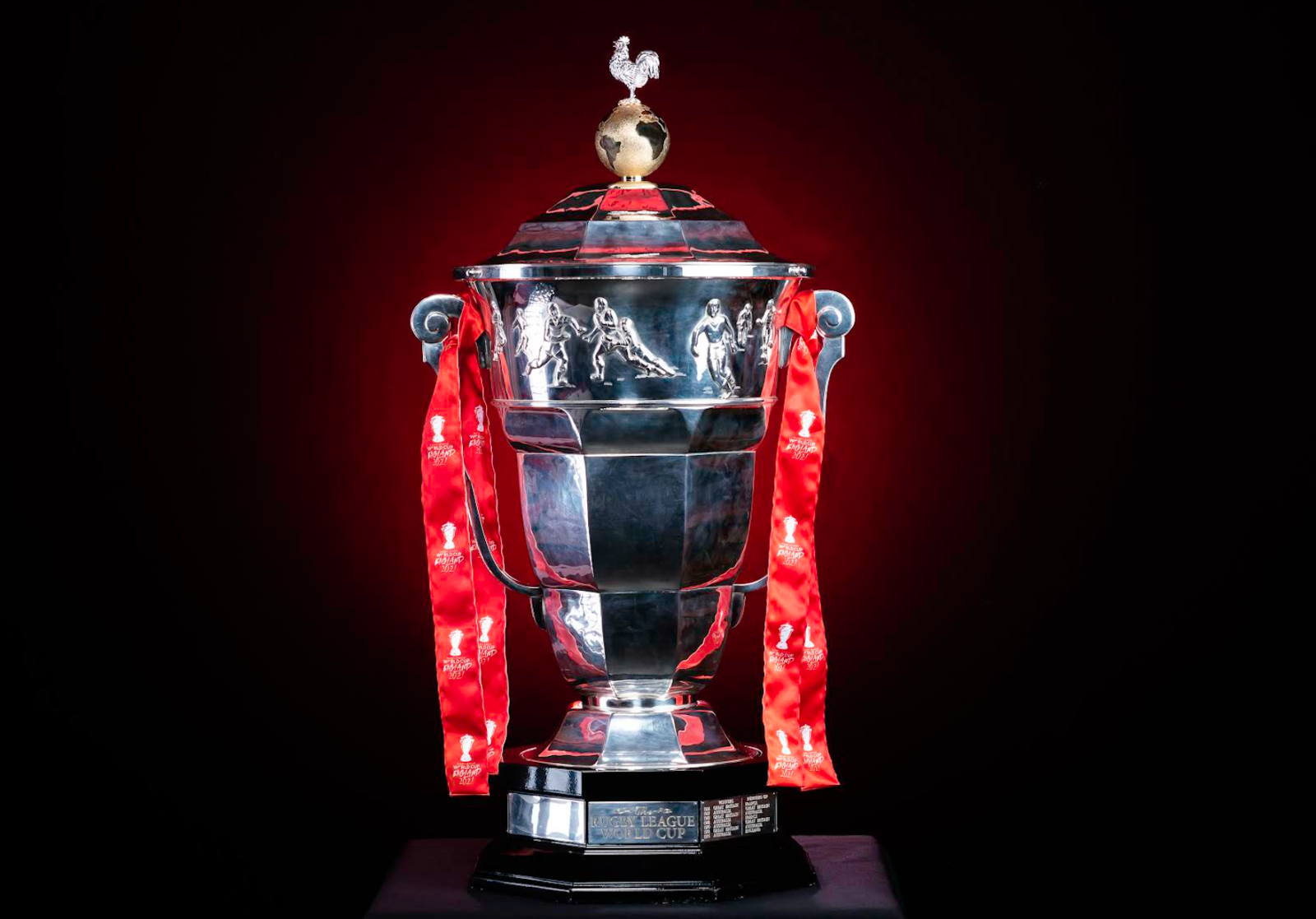 The men’s Rugby League World Cup comprises of 16 full and affiliate members of the International Rugby League including Australia, England, New Zealand, France, Wales, Jamaica, Fiji, Lebanon, Papua New Guinea, Samoa, Tonga, Italy, Ireland, Scotland, Greece and the Cook Islands. The competition will be the 16th instalment of the World Cup and will take place between October and November 2021 across a variety of venues in England.

This World Cup hopes to be one of the most digitally advanced tournaments of all time, amplifying the Rugby League’s platform across the World.

The last winners of the men’s World Cup are reigning champions Australia, who’ve won the tournament a total of 11 times and are hoping to continue this success into their next competition.

This World Cup hopes to be one of the most digitally advanced tournaments of all time, amplifying the Rugby League’s platform across the World, whilst also igniting and improving communities across the most deprived areas of England by providing better economic and social wellbeing for all thus creating a long lasting legacy for the sport.

Digital Sport spoke with Jon Dutton, the Chief Executive of temporary entity RLWC2021, to discuss the tournament and their goals for two years time.

The role of the Chief Executive Officer

“I mean the first thing to say is that I have worked on the project for four years, so I have been there since day one with the blank sheet of paper for the first few years before going to the Government, asking for their funding support and putting a bid together, winning the bid, setting the company up,” he said.

“We have one chance, so what we have to make sure is that we build a really solid foundation.”

“Over the last twelve months we’re really started to gain momentum as the tournament draws closer. The tournament, of course, is still two years away so it’s really unusual. As a chief executive, no day is the same and whilst many will say that very genuinely, we are a temporary entity. We will  deliver something, we will work towards the culmination, the trophies will be lifted, the fireworks will go off and my team’s job will be done and that makes it quite an unusual role that we are constantly building towards something.

“We have one chance, so what we have to make sure is that we build a really solid foundation.” 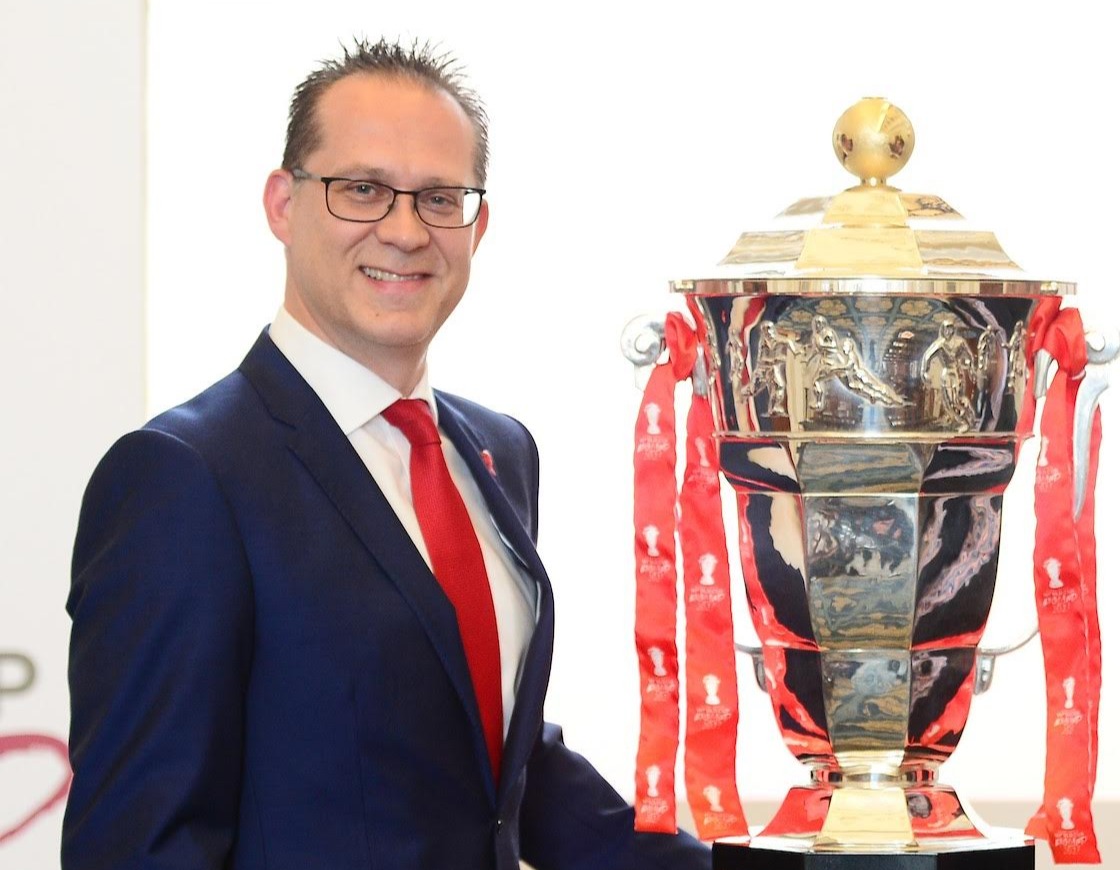 The values that define the Tournament

Jon was proud to discuss the values of the upcoming World Cup, ones that certainly make this competition very unique: “We’ve got four values which are really important to us: the first is to be bold and brave and that really is just being ambitious, being a disruptor, being different and really pushing the boundary.

“The second one is be world class in everything we do, what might be world class is that we are a global sporting tournament. The third value is authenticity, whatever we say we’re going to do, we’re going to get on and deliver. And the fourth value, which is incredibly important to us, is to be inclusive, and so we’ve taken a really bold decision. If you turn the clock back to four years ago, we stuck our hand up and said we wanted to have the men’s, the women’s and the wheelchair tournaments together for the first time ever, and if we’re going to do that in the early days of the planning, we had to do that with every athlete on the same platform, where we treated the competitions the same,” he continued.

“So far we’ve done that and I think that is a true celebration of a very inclusive sport promoting wheelchair athletes, female athletes and male athletes together which is great, it feels quite special.”

Running the various competitions at once will be a huge achievement for the team, so just how are they planning to pull this off?

Jon explained: “Our men‘s and women‘s World Cup finals will be staged on the same day, with the same ticket, broadcast live on the BBC and played at Old Trafford, and I just think that is really compelling.

“It’s a chance for us to showcase the growth in women’s Rugby League, both in women’s sports, but also to profile the athletes and the night before we will stage our wheelchair World Cup final, indoors, in a big arena in Liverpool and we will celebrate how truly inclusive wheelchair Rugby League is.

“Wheelchair Rugby League is a true derivative of the running game, it’s played by both men and women, it’s played by both abled and disabled athletes and what that gives us is just some incredible narrative for storytelling about some of the people that play the game. So all of that is just a way of promoting how inclusive the sport Rugby league is and really shining the spotlight on it for six weeks in October and November 2021”.

Everything from ticketing, to how people enter the venue, to the customer experience on the day, must be digitally driven.

The claim to be the most digitally connected sports entertainment event in 2021 is a big one. The role of digital continues to grow all the time, especially at major sporting events that bring together many different nations and athletes. Jon thinks it’s a “lofty ambition”, but is confident they can pull it off.

“It goes back to our value of being bold and brave. Everything from ticketing, to how people enter the venue, to the customer experience on the day, must be digitally driven.

“We are having some interesting conversations about how we use augmented reality and I can’t say exactly what that will look like yet because we are also mindful that in two years’ time technology and the digital world will have evolved once again, so we’re just taking our time to work with some key partners and learn.

“We’ve got an insatiable appetite to learn and that’s the reason we travelled to Japan to observe the Rugby World Cup. We’ve been to pretty much every single sporting event in the UK this year from Cycling to Cricket to Netball to learn and see what other people are doing, but we want to crystallise that into a world class customer experience of being digital first and just enhancing what happens on the field to create a brilliant customer experience”.

It’s a huge job in the hands of Jon and his team, but it’s one they’re very confident of pulling off as they look to deliver one of the most unique sporting World Cups ever seen. In two years time it will be very interesting to see how they’ve progressed, but one thing’s for sure, they’re definitely aiming high and have all the potential to deliver a stellar Rugby League World Cup right here in England.

The article was originally published by our partner DigitalSport.

END_OF_DOCUMENT_TOKEN_TO_BE_REPLACED

In recent years, motorsport has been taking up more and more of the spotlight in the sports industry. Despite an enthral...

END_OF_DOCUMENT_TOKEN_TO_BE_REPLACED

We speak to Rich Mills, Strategy & Design Director at Deltatre to discuss his career journey, how he transitioned to...