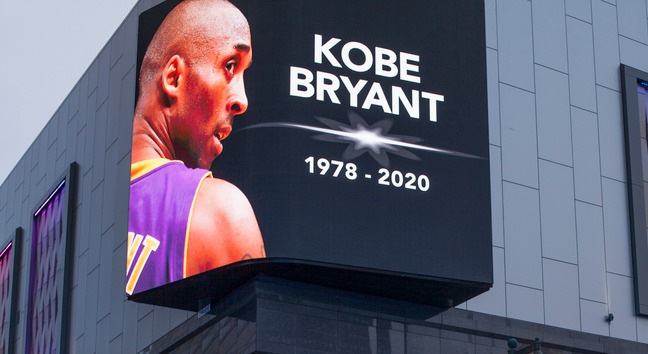 Basketball player, story teller, Academy Award winner, and businessman are a few of the roles that Kobe Bryant had undertaken during his life. Daniel G. Kelly II, the Academic Director for Graduate Programs at the Preston Robert Tisch Institute for Global Sport explores the incredible achievements and legacy of the American sporting superstar Kobe Bryant, on and off the field of sport.

One of the few athletes who were able to transcend sport successfully to fashion, film and the business industry, Kobe is affectionately known by “one name”, similar to superstar athletes such as Michael, Magic and Lebron. Kobe’s net worth was upwards of $680 million at the time of his retirement from the National Basketball Association (NBA) due to his endorsement deals with Nike, Turkish Airlines, Nintendo, Lenovo, Sprite and McDonalds which averaged out to about $20 million/year.

Kobe’s name recognition and brand value had increased exponentially after the conclusion of his basketball career due to pivotal investments where he found success as an investor, author, film maker and podcast producer. Kobe’s star power hit unprecedented heights as a storyteller in March of 2018 after winning an Oscar for his animated short film, “Dear Basketball”. Followed up shortly thereafter by the release of his book, Mamba Mentality in October of 2018, Kobe was able to accomplish what many of his predecessors in the NBA where unable to do, as he transitioned from basketball to multiple lucrative careers off the court.

Kobe’s name recognition and brand value had increased exponentially after the conclusion of his basketball career due to pivotal investments where he found success as an investor, author, film maker and podcast producer.

After his success in Hollywood, Kobe in the role of a businessman is where he was truly able to shine as he co-founded a venture capital firm called Bryant Stibel. Kobe’s creative vision with his partner Jeff Stibel opened the door for investment opportunities with “Body Armor” sports drink and the healthcare line “Art of Sport”. Additionally, Kobe’s work with Bryant Stibel led to investment opportunities with Epic Games (Fortnite), Cholula (hot sauce) and Dell (computers).

Globally, Kobe was one of the first athletes to cultivate multiple business relationships with China. Kobe was a frequent visitor to Asia and sojourned to China on a yearly basis. Additionally, Kobe embraced the Chinese culture by speaking in mandarin during interviews and actively engaging with his fans via social media. In 2009, Kobe was honored as a cultural-ambassador by the Asia Society. Additionally, Kobe’s had a multi-level e-commerce business partnership with the Alibaba Group which started with the 2015 documentary “Kobe Bryant’s Muse”, which focused on his love of the sport of basketball and the emotional ups and downs of achieving greatness. The next step in the Alibaba partnership was the creation of a “Kobe Bryant” social media channel based on his personality and successes as an athlete, story teller, businessman, husband and father.

Ultimately, Kobe’s legacy shows that he was a fierce competitor on and off the basketball court. Kobe’s ability to maximize his talent as a professional basketball player over a 20-year career only pales when compared to his success as a story teller and businessman. One of Kobe’s final triumphs prior to his death was the role he played in the lives of his daughters, specifically, Gianna. Prior to Kobe’s death he trademarked the term “ Mambacita ” as a homage to the potential of his daughter. Gianna who also passed away with Kobe in helicopter crash was primed to build upon the family legacy as an athlete and ambassador for women in athletics and business. Kobe’s passing at such a young age is compounded by the tremendous amount of success he earned in such a short amount of living. Kobe’s legacy embodies the promise of fulfilling talent in sports and business, especially when determination, due diligence, and an honest effort are the pillars of your character.

Daniel G. Kelly II, Ph. D is the Academic Director for Graduate Programs at the Preston Robert Tisch Institute for Global Sport at New York University School of Professional Studies. Prior to joining the staff at NYU, Dr. Kelly was the Faculty Director of the Sports Industry Management Program at Georgetown University.