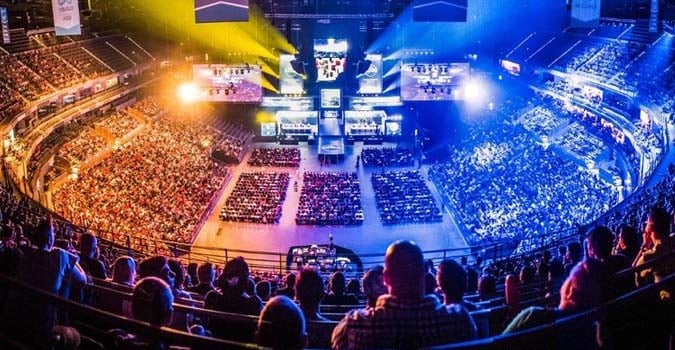 Dive into the world of eSports: an exponentially growing industry predicted to be worth billions of dollars by 2020. The sky is the limit for investors, audiences, and participants alike. Professors Aaron CT Smith & James Skinner, from the Institute of Sport Business at Loughborough University London, examine this hot topic in the business of sport.

In a surprise only to sporting traditionalists, eSports were recently conferred a place as an official medal ‘demonstration’ sport at the forthcoming 2022 Asian Games in Hangzhou, China. The move, championed by the Olympic Council of Asia (OCA) and bolstered by the commercial might of Chinese online retail powerhouse Alibaba, confirmed the emergence of eSports as fully-fledged sports complete with both an immense participation base and a lucrative professional stratum. Its development also signalled a major transition for the nascent sport, having moved swiftly from the homes of most players to a global, online marketplace.

With eSports a component of the world’s second largest multi-sport event (eclipsed only by the Olympic Games) the entry in the Asian Games foreshadows the maturation of a new and unique form of sport business. Although relentless improvements in technology have long played a role in sporting success, for the first time a generational leap has redefined what it means to be an athlete on the world stage. As a result, eSports have exploded in popularity across the developed world; faster than any sport in history. An inventory of eSports’ current highlights underscores its startling growth: professional leagues, international contests, college and university scholarships, investments from mainstream professional sports team owners, exclusive broadcasting and digital rights deals, significant commercial sponsorships, generous prize money, and a burgeoning elite cadre of professional players earning up to seven figures. All of these developments have arisen because eSports materialised in tandem with a new generation of participants, spectators, and sponsors inimitably attracted to the confluence of technology, gaming, tribalism, and of course, commercial opportunity.

A curious eSports feature is its fragmentation and diversity. Talking about eSports as a singular activity is not the same as talking about tennis or even a multi-event sport like gymnastics. The eSports audience is passionately disparate. Each game within eSports commands its own distinctive following, usually on the basis of game title. In fact, eSports can be interpreted in two ways. First, it can be viewed as the competitive playing of an electronic game, irrespective of the game’s specific content or nature. That is, the game might be associated with winning a war or with building a city; the central issue has to do with the competitive nature of the activity. Second, eSports can be viewed as the playing of electronic games directly associated with traditional sports such as football in its many codes, boxing, or baseball. From this vantage, eSports revolve around competitive performances in popular sporting simulations like Madden (NFL) and Fifa (Association Football).

As a result, eSports are intractably connected to the specific modality of the games themselves. In some cases, like the ubiquitous war game simulations or first person ‘shoot-em-ups’, players and audiences have nothing to do with ‘normal’ sports. Other players of sport-related games may or may not hold an interest in the conventional versions of the sport they are duplicating. Both forms of eSports hold competition in common, so winning maintains its primacy as the sovereign purpose of participating, at least at the elite level.

We should be cautious about typecasting eSport players and fans as just another set of sport consumers. For example, somewhat ironically, the vast majority of eSports participants do not focus on sporting games. Instead, what have become known as ‘multiplayer online battle arena’ (MOBA) games such as ‘League of Legends’ and ‘Dota 2’ dominate, with first person shooting games like ‘Counterstrike’ and ‘Call of Duty’ not far behind. At the moment, it appears unlikely that even the most popular sports-related games will break into the top tier of eSport followings.

One explanation for the distance between the two versions of eSports proposes that audiences will prefer to watch or play ‘real’ sports over their electronic counterparts. Conversely, audiences do not have the option of participating in ‘real’ war, so its electronic facsimile represents a unique activity in its own right. Nevertheless, as game sales attest, millions of consumers choose both versions of eSports, unequivocally demonstrating their market appeal for at least a core segment.

The largest eSports organization is the Electronic Sports League (ESL). To the surprise of many, the league was founded more than 20 years ago and now boasts a registered membership exceeding five million with over one million teams. eSports was estimated by a Newzoo global eSports market report to generate around US$700m in revenue based on a global audience of nearly 400 million people. The trend estimates a 2020 revenue of US$1,500m. So far, the largest prize pool in eSports was provided by the Dota 2 2016 International Championship Tournament, collectively worth US$20m. The winning team took home nearly US$10m and more than US$1.8m each.

With a formidable foundation of players located in Asia, it is unsurprising that the International eSports Federation (IESF) was founded and remains based in the world eSports capital, South Korea. A long campaigner for competitive gaming to be included in the Olympics, the IESF invested US$14.5m to produce the World Electronic Games in the Chinese Changzhou province. With 60,000 participants from 120 countries and regions, and a US$5.5m total prize purse, the major event raised enormous interest in eSports in the lead up to the Asian Games announcement. Along with the IESF, the British International eGames Committee (IEGC) only recently submitted a request to the International Olympic Committee (IOC) for clarification on how to petition for the official Olympic program. Pertinent to this Olympic ambition, the Alibaba Sports Group—Alisports—which was established in 2015, announced in 2016 a $US150m sponsorship commitment to the IESF. The deal is particularly noteworthy because in 2017 Alibaba signed a US$1b 11-year deal with the IOC to be a prominent summer and winter Olympics sponsor. Other sponsors feature game developers such as Riot and Blizzard, tournament organizers like ESL Gaming Network, and companies with associated commercial products including Red Bull, LG, and Logitech Gaming. Sponsorship and advertising currently contribute around 75 per cent of eSport revenue.

At the same time as eSports has proliferated in Asia, it has also enjoyed unprecedented growth in the United States. For example, in 2017, the University of Utah began promoting athletic scholarships to players who make the college’s varsity eSports team, the first of its kind for competitive gaming associated with a National Collegiate Athletics Association (NCAA) participating university. In total, 15 US colleges offer eSports scholarships, presaging cultural acceptance as an authentic target of student interest.

Although the popularity of many sports divides along compatible geographical and ethno-cultural convergences, it is clear that eSports connects with a certain under 30, technologically-savvy, well-educated, affluent, demographic segment, irrespective of their location. According to one study, for example, many elite eSport players are part time or full time undergraduate students, having been active in developing their skills since cultivating an interest in high school. After becoming recognised by professional gaming clubs through their high rankings and performances in online gaming forums, the developing elite players gained coaching and representative affiliations. Unlike most sports, however, the majority of serious players compete and practice from home, some of the best committing up to 10 hours a day at the screen.

One of the most interesting aspects of the eSports business transformation is its unusually hastened product lifecycle. Accelerated massively in comparison to traditional sports like tennis, wherein the premier event still demands compliance to a draconian dress code (eSports do not require the wearing of white underwear), eSports is evolving as it strikes each new phase of development. For example, unexpectedly, despite its location independence, eSports seems to be heading towards a content distribution model largely predicated upon regional exclusively. That is, while some tournaments might be broadcast for free, the rise of pay per view platforms will likely ensure that a sizable proportion of content will fall behind a paywall. We may well expect that live sporting event brokers like Facebook and Amazon will make a play for exclusive distribution rights.

In addition, professional players are beginning to see signs that their restricted contracts will give way to standardised player agreements, enforced, or at least advocated as a result of newly forming player unions like the Professional eSports Association, which is premised upon revenue splitting between eSports organisations and players. How eSports’ inexorable transition into professionalisation will affect its founding culture of independence and freedom is unclear.

As a professional tier of competition emerges in eSports, so too do all the problems that come with commercial dividends. First, the ESL recently announced plans to introduce an anti-doping program following the admission by one of its senior-most players to using the cognitive enhancer and pharmaceutical Adderall during a competition. With US$250,000 in prize money available for the competition, this singular admission may well be just the tip of the cognitive performance-enhancing drug iceberg.

Second, gambling around eSports remains unregulated. It is anyone’s guess to what extent the temptation for game fixing and other forms of corruption have permeated the sport’s growing ranks.

Third, like technology start-ups, and the infamous tech-boom and succeeding dot-com crash of the early 2000s, eSports is vulnerable to overreaching in attempts to capitalise on its seemingly exponential commercial inflation. The business models governing the monetisation of the sport remain under-developed and to a large extent, experimental.

Finally, eSports make governance troublesome. Fragmentation abounds as new federations and competitions gain traction, typically clustered around specific games. No one really knows whether eSports will end up being represented by overarching governing bodies or by more stratified game, community, geography, or stakeholder affiliations. We might even speculate that the most successful will ultimately associate directly with commercial providers or distributors in the case of MOBAs, or with existing clubs, leagues, and federations of conventional versions of sports that have electronic varieties.

Adding to the uncertainty is the powerful norm within eSports to rebel against and subvert the mainstream. Many players joined eSports because they felt uncomfortable trying to fit into mainstream hobbies and sports—or could not access them— instead electing to join the ranks of the anonymous, distant, and fluid world of the electronic gamer. Nevertheless, eSports appear on a stellar trajectory, destined to take their place on the world sporting stage, complete with its own collision of cultural idiosyncrasies and commercial conundrums.