What do professional football players want to be when they grow up? 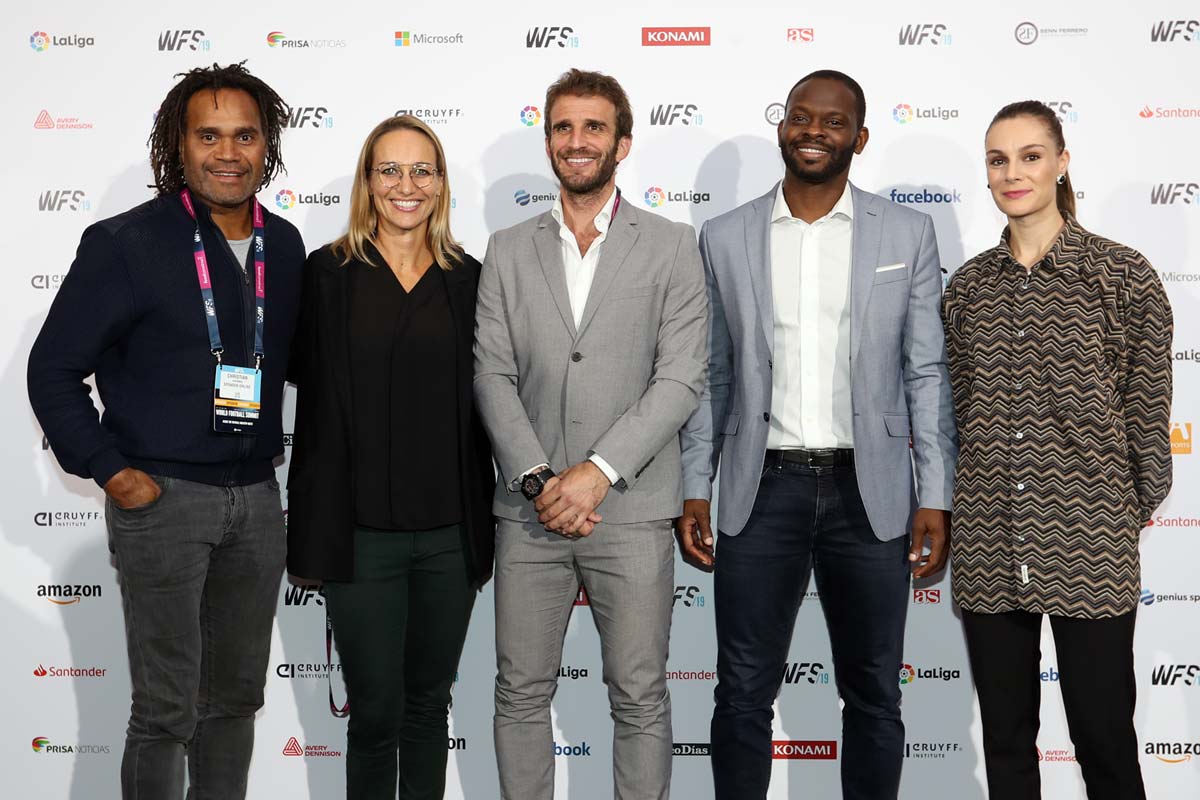 Their point of departure was not easy and neither was what followed. Johan Cruyff Institute brought them together in September at the World Football Summit in Madrid to reflect on the important role of academic studies in securing a future after football. Also participating in the debate was Shabnam Mobarez (24), the former captain of the Afghan women’s football team, an example in women’s football of a person used, from a very young age, to questioning the laws and going against the current. What do professional football players want to be when they grow up? It is not a question that anybody asks very often, not even they themselves. 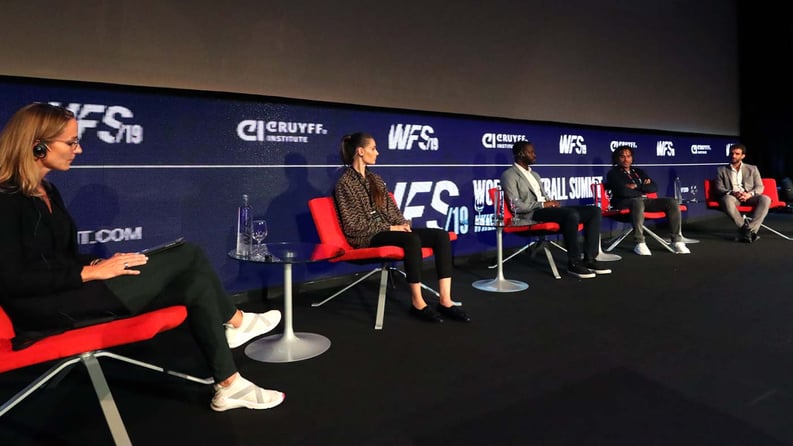 Shabnam Mobarez: From the war in Afghanistan to captain of the national team

Shabnam was a war child in Afghanistan, a country her parents fled from when she was seven, bound for Denmark. She started a new life in Europe, as a refugee. For the first time, the little girl felt free to go outside to play with other children in the neighborhood, although cultural barriersled her to feel excluded because she wanted to play football, a boy’s sport. She persisted in her will to continue playing and received an invitation to join a professional club, Aalborg BK. In 2014, they wanted her for the Danish national team, but she again chose the complicated path: representing her country, Afghanistan, and from there set an example in the fight for equality and human rights.

She was captain of the Afghan national team from 2016 to 2018, until the moment when the leaders of the federation wanted her to sign a contract that went against her principles. Shabnam gave up her armband at the end of last year. “They forced us to sign a contract that was not acceptable to any of us, so I refused along with the other girls and basically they kicked us out of the team,” says Shabnam.

Last June, the Afghan authorities ordered the detention of the former president of the Afghanistan Football Federation (AFF), Keramuddin Karim, who was being investigated for allegations of sexual abuse made by several players of the Asian women’s national team. The following day, FIFA announced his permanent suspension. Four more members of the board were also suspended from their positions in December 2018 for the same accusations.

“Right now I am in a dark period of my career, waiting to see what happens, while I think about my options,” Shabnam reflects. I know that women’s football will not support me when I close this stage and I have fully retired, so I am very clear that I need my studies. I’m going back to university and maybe I will resume my medical degree so I can graduate and see if I can generate a change in medical resources in Afghanistan.”

Shabnam Mobarez, football player and captain of the Afghan national team from 2016 to 2018.

Iván Alonso: From Uruguay to paradise

Interestingly, Iván Alonso was also studying to be a doctor until his father’s genes and career changed his priorities. The current general manager of the Club Nacional de Football of Uruguay is part of the Alonso lineage, three generations of Uruguayan footballers. His father Daniel passed on his passion for football, but also an awareness of the temporality of his profession and the need not to forget his studies. His father also played professionally, for the Uruguayan national team, and in the Spanish La Liga and in Mexico, but a serious ankle injury forced him to retire from football when he was only 25 years old. “I grew up in a working-class family, in a humble neighborhood, and I was lucky to have the parents that I had because they transmitted fundamental values and principles to help me manage my life. My father always instilled in me and my brother that education was a fundamental tool in our development.”

So Iván listened to him. First studies and then football. “I finished my high school studies in medicine at 17 and then I told my parents that I wanted to devote two years to what was my passion – football.” He added a zero to those two years. He burst into the Uruguayan first division like a cyclone and, at age 19, crossed the pond for the first time to play in Spain, signed by Alavés. “I came from a humble neighborhood of low houses and when I arrived in Europe, seeing 40-story towers for me was something extraordinary, it was like going to Disney,” Iván explains remembering his excitement at the time.

And there, in Vitoria, aged 19 and with a whole new world to discover, he again came across someone who was wanted to make sure that he would continue playing with his feet on the ground. “I was going to stay alone in the hotel before my presentation with Alavés when an Argentine player, Hermes Desio, came to collect me and take me to his house because he thought that at 19 I should not stay alone in a hotel. He asked me a lot of questions and there was one that struck me: ‘when did I plan to prepare my retirement from football?’ I laughed and said ‘in 20 years I’ll see what I’ll do’. And Hermes said to me: ‘Ivan, do you have a crystal ball that will show you how long this is going to last for you?’ And he was right. I was lucky enough to play 22 years, but I am sure that sport, and in this case football, can be just for a while, as happened to my father, but a person’s education and training is for a lifetime.” 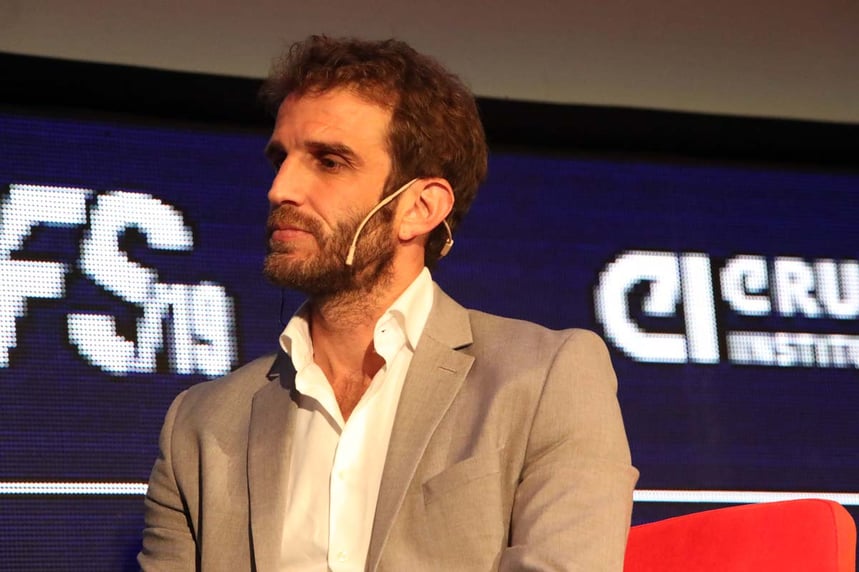 In 2016, FIFPro, the International Association of Professional Footballers, commissioned the first report on employment in its collective, a study that the organization itself coordinated with players from around the world and the results of which were analyzed by the University of Manchester. In the educational section, the conclusion is devastating: only 13% of active professional footballers who play in Europe have completed higher education, compared to 53% of the EU male population that they compete with when they apply for a job after finishing their sports career. In the case of women’s football, the difference is not so wide: 46% of active professional women footballers study a degree while they are playing.

“Nobody helped me develop my second career,” explains Louis Saha. “They trained me as a football player, but I had to take responsibility and take control over what came next.” Louis retired at the end of the 2012-13 season, as a Lazio player, after having achieved almost everything in English football. Her played forl Newcastle United, Fulham, Manchester United, Everton, Tottenham Hotspur and Sunderland. With Manchester United, he won two Premier League titles, a UEFA Champions League and a League Cup. He also played for the French national team in the UEFA Euro 2004 and the FIFA World Cup 2006. He played 17 football seasons at the highest level, 17 years of “living in a bubble, until towards the end a series of injuries made me react suddenly. It was like a wake-up call that made me understand that that life was not going to last forever,” says the former player.

Louis Saha reveals himself as an entrepreneur

Louis Saha is now CEO and co-founder of AxiStars, “an application created to provide a support network for active or retired athletes who want to work with brands as influencers and don’t know how to do it.” Louis responds to the entrepreneur profile. He created this platform after taking a period of reflection after he retired and publishing the book Thinking Inside The Box, a compilation of reflections on life, written by himself, from confessions of colleagues in the business like Alex Ferguson, Zinedine Zidane or Didier Drogba, among many others.

“During our career we get used to not showing any weaknesses, we don’t talk about it. The book helped me see many things, I gathered a lot of information and, once finished, I was already thinking about building this platform to reach many more people. I wanted to help players to be connected, to share, to see different opportunities, to have hopes and to understand the true importance of education. Around 50% of the stars in our industry are ruined five years after retiring; it’s a shocking figure and it is not going down,” says Saha.

The current occupation of Christian Karembeu is also related to the world of sponsorship. Once the star of Real Madrid at the end of the ‘90s, he has also known how to occupy his time since he retired in 2005. The Frenchman is a strategic consultant for Olympiacos, as well as an investor and advisor to Sponsor.Online, a digital sponsorship platform that began operating in early 2019 and already has more than 150 football clubs and 50 brands.

“My father was a teacher, so education was something deeply rooted in my family and I was fortunate to be part of that environment,” acknowledges Karembeu. He was born and raised in New Caledonia, in a humble home. “I studied Spanish and English before moving to Europe when I was 17, and it was in France where I really learned not only to play football but everything that that meant—the time and dedication required for high-level competition, the importance of sleeping and resting well, understanding the whole environment, in short, becoming a footballer.”

Karembeu made his professional debut at 20 in the ranks of FC Nantes, who put the newly arrived player from Oceania in their academy to polish his talent. “In Europe it is much easier to combine studies with football through the academies, but it is not the same in other countries,” says Christian. “I think it is a good way to train them for when their sports career ends.”

Christian Karembeu, strategic consultant for Olympiacos, as well as an investor and advisor
to Sponsor.Online, former professional football player.

Iván Alonso does not defend the use of obligation. “One must be aware of things and choose them, but sometimes drastic changes are necessary. In my country, to get a job you are asked for basic training. And, why not in football? Why don’t you need to have academic training to be a professional footballer?” reflects the Uruguayan. Club Nacional de Football, of which he is general manager, is already giving its people a chance. The Uruguayan club offers its players and managers the chance to study at Johan Cruyff Institute thanks to the signing of a collaboration agreement signed this year.

Shabnam Mobarez was the only one in the round table who still didn’t know if her days in football are over. But she is ready for when the time comes. She is the mother of a five-month-old baby that she wants to educate with values that she has learned very cruelly. “I think it is very important to have models to follow and never lose our identity no matter how much we have achieved in sport. In the end, when that career ends and we return home, who we are is the most important thing. You have to talk, find solutions and help athletes not to get stuck when they finish their incredible careers.”

END_OF_DOCUMENT_TOKEN_TO_BE_REPLACED

Why study a Masters in Sports Business

Are you considering a Master's degree in Sports Business, but not sure if it’s the right career choice for you? We spoke...