The countdown to UEFA EURO 2020 begins

The FA and London have marked one year to go until the start of UEFA EURO 2020, using the milestone to reveal new details about the upcoming tournament – including the extensive volunteer programme and announcement of Rio Ferdinand as its lead ambassador – and encouraging fans up and down the country to ‘be part of it.’ 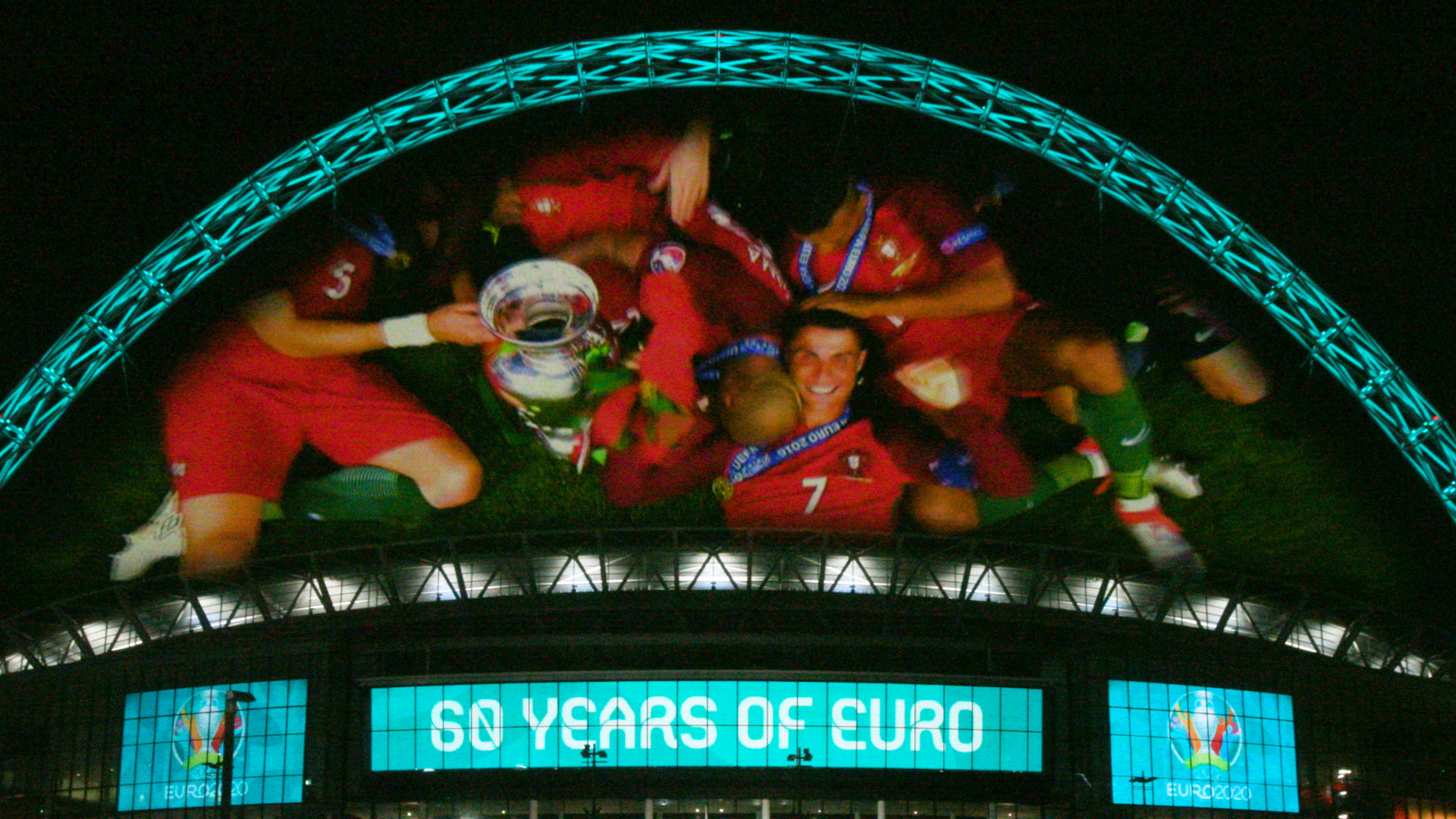 In its 60th anniversary year, UEFA EURO 2020 will be the biggest and most inclusive celebration of European football in history, with the hosting shared by 12 cities across Europe – including London – for the first time. Wembley Stadium will welcome over 600,000 fans when it hosts seven games next summer, including both semi-finals and the showpiece final.

The FA used the milestone to announce former England international, Rio Ferdinand, as its lead ambassador for the tournament. To mark his appointment, a selection of Ferdinand’s favourite memories from the EUROs was projected underneath Wembley’s iconic arch using hologauze technology in a ‘first’ for the national stadium. Moments beamed under the arch included Antonin Panenka’s winning penalty for Czechoslovakia in 1976, Marco Van Basten’s volley for Holland in 1988, Paul Gascoigne’s famous EURO ’96 goal against Scotland and Portugal’s jubilation following their victory in 2016.

It’s an honour to be named as the UEFA EURO 2020 ambassador for the tournament in England. The EUROs have been responsible for some of the most iconic moments in football history and I can’t wait to see more take place at Wembley and across Europe next summer. Whether it’s through applying to be a volunteer, dusting off your boots, attending a game or just enjoying the atmosphere, it will be a summer to remember – make sure you’re part of it.

Alongside the announcement of Ferdinand’s role, 12 June 2019 also marks the official opening of the application window for the UEFA EURO 2020 Volunteer Programme, giving people the opportunity to play a valuable part in the delivery of the tournament through a range of roles at Wembley Stadium. For more information visit the website here.

The Mayor of London, Sadiq Khan, is also now recruiting UEFA EURO 2020 London Host City Volunteers, who will be the face of London, directing visitors to London landmarks, offering friendly and helpful advice to both tourists and locals and leading teams of fellow volunteers at visitor hotspots. For more information visit the website here.

As a huge football fan, I am so excited that London is hosting seven games at UEFA EURO 2020 next summer. It shows that London provides the perfect stage for some of the world’s greatest football talent and is open to fans from all over Europe.

We are determined to make London the most inclusive and engaging location of all the host cities and we want people from across the capital and the country to get involved – not only as spectators, but as volunteers and ambassadors for our city. There are exciting volunteering roles for everyone, so if you want to play a vital role in ensuring everyone has an unforgettable summer of football, please sign up to our volunteering programme.

Ticket applications for UEFA EURO 2020 are also now officially open and will remain open until 12 July 2019. Fans are able to apply for an initial batch of 1.5 million tickets for all 51 games, including the seven hosted at Wembley, via UEFA’s ticketing portal: EURO2020/Tickets.

In the build up to the tournament next summer, people across the country will be able to get involved by participating in the nation’s largest and most inclusive small-sided football festival, with all roads leading to a national final in London. Further details will be announced in due course.

We have a fantastic and frankly enviable record for hosting the world’s biggest sports events and I am sure London and the UK will once more give football fans from across the globe an incredible welcome here next summer.

Volunteers will help play a key role in making UEFA EURO 2020 a success. With just one year to go, I hope everyone with an interest will apply to be a part of this historic footballing celebration.

This article was originally published by our partner Sports Venue Business.

For career opportunities at UEFA EURO 2020, visit UEFA and Global Sports for the latest live jobs.