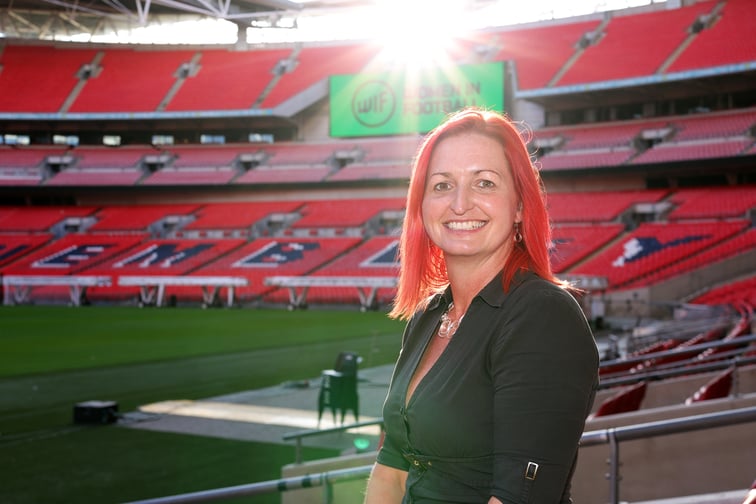 Michelle Dorgan is the Head of Marketing & Commercial at Women in Football and a sports management lecturer at AMOS London; in this article, Michelle tells us about her journey in the sports industry, how the perception and media coverage of women’s football have changed over the years, and her view on the marketing strategies to attract more women in the sports industry.

Her journey in the sports industry

Since I was a child, I always loved sports, especially football, and a dream of mine was to be working, one day, in this industry. Unfortunately, growing up in the era I did, there was no business school dedicated to Sports Management, so I had to find my own way into the industry. Therefore, I went for the classic approach and graduated with a BA (Hon’s degree) in International Marketing Management. After taking time out to travel, I landed my first job in marketing, which gave me the essentials needed to switch to a career in Sports Marketing.

I started off in athletics working for UK Athletics (now British Athletics) on the sponsorship/partnerships side of things, managing partners like Aviva and Red Bull. That role helped me get onto the first step on the ladder, and in the years which followed, I have covered most areas of sports marketing. I've worked for various sports organisations including charities, and in wide ranging roles, such as a Marketing Consultant, Marketing Manager and Head of Marketing. These required running marketing campaigns, creating corporate membership programmes, charity formation, sponsorship, event management and so much more. It has been a crazy ride; and today I am the Head of Marketing and Commercial for “Women in Football”, preparing my PhD in the “role of female leadership and what football as an industry can do to develop female leaders”, while also being a lecturer with AMOS.

I have always been a fan of football, but over the past 20 years it has been very difficult to follow women’s teams. There is no coverage or hardly any, so usually, female football fans like me would follow their favourite clubs’ men’s teams! Media plays a huge role in the rise of an emerging women’s sports market, especially woman’s football. I think the media coverage is getting better, but there is still a lot more to be done. We see more articles in the newspapers than we ever have before, but unfortunately, the comments are often more focused on the way women players look than the way they play!

Traditionally, the large majority of journalists covering the sports section were men, therefore, they mostly covered subjects that mattered to them. On top of that, the main audience for sports’ programmes were also men, so the big TV broadcasters and newspapers were only focusing on men’s sports. We need more females working in journalism, marketing and all areas of the sports industry to be able to make a real difference - this is why what we do at Women in Football is so important.

Fortunately, it is changing. Sky Sports and the BBC agreed on a deal with the WSL (Women’s Super League), so now, it is accessible by the vast majority of people. And we can see that, now, even men are watching the women’s league! On top of that, netball, cricket, and rugby are being broadcasted too, among others, which is great to see.

To start with, I would have to speak about merchandising. This is a crucial part of the fan experience. Being able to buy sports apparel for your favourite team reinforces the link between the club and its fans. But for how long have we had to buy men’s football shirts? They need to give us more choice and not make stereotypical assumptions. For example, do not assume that every female wants a pink shirt, we support our club, therefore we want our club’s colours.

Secondly, I would like to speak about the importance of having role models. There’s a saying which we are hearing a lot lately, which is: “If she can see it, she can be it”. And this works for any kind of job. If you can see someone that looks like you, doing the job you aspire to, it helps you to believe you can do it too! This isn’t just a question of gender, it’s about all the other elements; ethnicity, sexuality, or even your age.

When it comes to social media, I think that cross-promotion is something that should be intensified. A club like Liverpool has so many famous male players, why not have them taking pictures with and promoting the women’s team. If you have the players say, “come and support our women’s team”, that will undoubtedly help to drive more interest! In addition, I love being a lecturer at AMOS. It may sound corny, but the opportunity to inspire and encourage the next generation of sports marketing professionals and especially the females, is so important to me. My mission is to inspire them, try to be the role model that I never had, and hopefully see more and more females studying sports management in the coming years!

A lot of changes have happened in the past 5 years, and I am sure, with the help of future generations, we will soon see women’s sport rise to where it should be – women make up around 50% of the population and it’s time for this to be reflected in the sports industry.

END_OF_DOCUMENT_TOKEN_TO_BE_REPLACED

Fan engagement: can fans influence the strategy of sports organizations?

Rui Biscaia, a renowned fan engagement researcher, explains how sports organizations have been changing their perception...