Inside Performance Analytics in Football 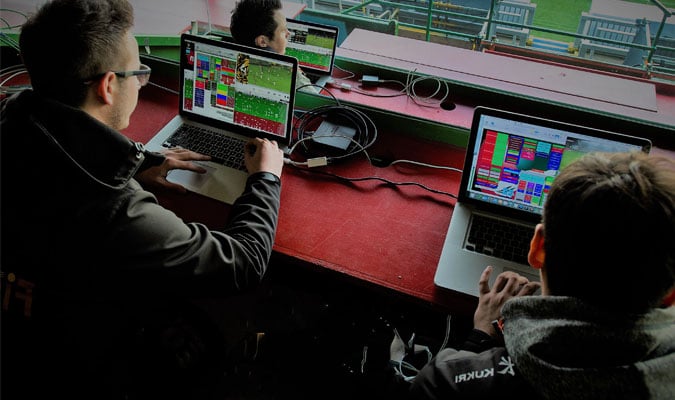 As you are likely aware, performance analytics within sports clubs and teams is increasingly big business. The advancements and accessibility of technology and data has transformed this sector and widened the game change benefits clubs can achieve from embracing performance analytics. The David Brailsford coined term ‘marginal gains’ is now a universal metric for clubs and teams, not just in the top flight, to get that competitive advantage. Hudl, is at the forefront of this analytics revolution, developing the commercial toolkits and talent to deliver performance analytics to sports at every level. We take a look behind the scenes at how clubs are implementing Hudl’s technology to fuel innovation and progress and how they are supporting talent to build careers in this burgeoning sector within sports business.

Derby County F.C have one of the most advanced video analysis departments in English football. It should be no surprise that the two-time English Champions choose to invest in technology. In 2008, Derby County Football Club hired Tom Glick — a move that revolutionised and modernised the previously traditional football club. In 2015, Melvyn Morris, CBE, acquired the club and continued Glick’s legacy.

Joe Carnall, Head of Performance Analysis at the EFL Championship club, talks through Derby’s structure, their technology stack and the critical role of video analytics across the whole club, from first team to their academy.

Pre-match, a specialist Opposition Analyst will watch a team five times, four on video and once in person to produce a detailed report to the coaching staff and manager. This report will include tactical video footage and will cover aspects such as possession, attack, defence, strengths and weaknesses. Part of the opposition report is also presented to the players to help their preparation for a game.

“Players can ask for anything they want and we’ll provide that for them,” Carnall added. “[Each] individual player has got a different way they prepare for a game, so we’ll tailor what we do around that to make sure they are going into the game as prepared as they possibly can be.

“In terms of the software and the infrastructure we have in place we are really at the top end of the Premiership. We use Sportscode which is an industry standard for capturing and coding games so we can provide instant feedback. We do that live to the bench through communications, as what we see up in the stand is a very different picture to what you see at pitch level.”

Video isn’t confined to match analysis, however. It plays a much bigger role at the centre of a carefully assembled performance technology stack.

An analysis suite houses all first team and academy staff, and connects to a 37 IP camera system at the training ground, which provides an enviable array of integrated technology.

Technical data, combined with GPS data, drawing tools and a mobile app, allow the analysts to share video footage and feedback with players around matches and in training sessions.

“A camera system at the training ground allows us to film every pitch at multiple angles and we’ll live code what’s going on in the training sessions,” said Carnall. “We are a resource to back up everything that the coaches and manager are doing,” explains Carnall. “It’s our responsibility to flag up anything that you can’t see but that the numbers are telling us is happening.”

Player adoption is an important element of a strong video culture . The Derby staff has won the players’ trust through empowerment and working closely with individuals to support their continued development.

“The players themselves will come and ask to see things,” said Carnall. “They’ll ask for feedback, and that’s where analysis as a tool is really important to them to develop as players.

“The senior players now, when they were coming through as young players they had analysis as a tool, so analysis now is standard for them and it’s up to them to use it as they see necessary.

“We’re giving the players and staff everything they possibly need to be as prepared as they could be to go and win a game on a Saturday.”

How clubs are supporting careers in performance analytics:
Sports clubs at every level face the challenge of finding quality talent to make the most of any new technology at their disposal.

Natasha Patel, head of performance analysis at Southampton FC, explains how they have built strong links with their local university to capitalise on the increasing numbers of analysis degree courses they offer.

“We have a big work placement student programme at Southampton Football Club,” said Patel. “We’ve worked with local universities for the past five years and branched out more nationally as analysis has gotten bigger, not only in undergraduate degrees but also master degrees.”

“[We are] also working with the universities to develop their programmes for the industry as a whole.”

Natasha recognises the rapid growth of performance analysis as a career path in its own right. “The intake for students at universities to undergo analysis at undergrad or post-grad level has gotten bigger due to analysis as a whole, as an industry, getting bigger and bigger — whether it be statistically, video analysis, or from Monday Night Football, for example,” said Patel.

“Information that was kept in house is now available on a commercial level and it’s enticing people to want to know more about what is going on behind the scenes.”

This article was written by Hudl for Global Sports