How to get in on the sports analytics bandwagon 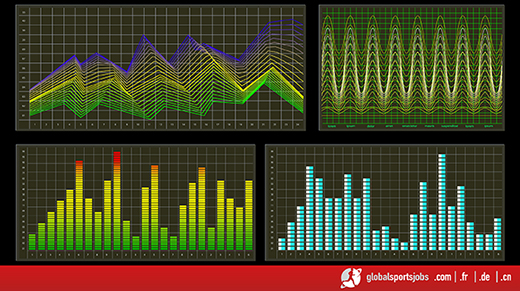 These used to be the instruments of mass snoring, and yet in today’s modern era of sports analytics, they are now the potent energy elixir of the sports world, sparking new ideas, changing organizational philosophies and flat out helping teams win.

Who thought we’d see the day that data became mainstream and “cool”?

“The process of analyzing data streams to discover operational efficiencies is present in all sports ranging from soccer to basketball to cricket and rugby,” says Sports Management Worldwide President Dr. Lynn Lashbrook. “Teams at all levels – professional, minor leagues and college - are hiring analytics specialists because it’s a proven method of increasing performance.”

Mention sports analytics and most people instinctively gravitate towards baseball, a sport deeply rooted in statistical markers begging to be broken down and analyzed, but analytics has a growing role in free flowing sports like soccer as well.

“Most of the professional soccer clubs in the world use Wyscout match analysis and scouting platform to assist with player recruitment, analyze their opponents and their own team,” says Richard Trafford, Wyscout’s Director of UK and US operations and an SMWW course mentor . “The platform is so powerful you can immediately call up all the goals scored by an individual player, all of their free kicks, one-on-one situations and more. There is a wealth of efficient learning that can come from having powerful information at your fingertips.”

Coaches have long relied on their instincts and years of experience to rule decision making, but more and more are seeing the value in analytics and leaning on the data to influence their in-game management and game planning. At the 2015 Sloan Sports Analytics Conference Michael Niemeyer, analytics head of 25-time Bundesliga champions Bayern Munich explained how then manager Pep Guardiola began to embrace the statistical revolution and lean on analytics.

Guardiola, known for his desire to try new approaches and find any possible advantage, would ask Niemeyer for things that would lead to a numeric advantage.

“If you know that the coach wants to see this information, then you look for that,” added Niemeyer.

When Bayern Munich was preparing to play AS Roma, positional data showed that one of Roma’s three strikers, longtime star Francesco Totti, played well behind the other two. This allowed Bayern Munich to play just three defenders while still outnumbering Roma’s strike force.

The exact numerical advantage Guardiola was looking for.

“Analytics are a way that someone who didn't play the game or coach the game can be a part of the strategy of a team both in scouting, coaching and decision-making,” says Dr. Lashbrook. “We offer five online analytics courses that have proven very popular because they are cutting edge and let our students get into the action in their own way.”

It isn’t just the coaches that are convinced of the power of analytics, players themselves are turning to data and video analysis for an edge.

Former NBA star Shane Battier was an early adopter of analytics data, helping to prolong his career by mastering the corner 3-pointer, which was determined, by analytical data of course, to be the most efficient shot in the game. Later in his career as a member of the Miami Heat, Battier began to use the available analytics to learn more about how to better defend his opposition, which eventually led to another superstar convert: LeBron James.

“Once he had that little [taste], he wanted more,” said Battier, adding that the King later bought into shot-efficiency data and other metrics. “If the greatest player of his generation is looking for an edge, I think other people would be wise to follow.”

There is no denying the positive impact of sports analytics on the entire sports world, if it wasn’t working it would have crashed and burned faster than Fernando Torres’ career. But it hasn’t, the field has grown by leaps and bounds with more and more 3 rd party companies developing analytics software and teams investing in staff.

So how do you become one of those staff members? It starts with the right skill set.

“At SMWW we offer five different sports analytics courses , including a soccer analytics course that is the only platform in the world which includes Wyscout training,” says SMWW Director of Soccer John Print. “Wyscout is the most popular analytics platform in soccer, but they don’t do any training courses except with us.”

In addition to soccer, SMWW offers 8-week online analytics courses in basketball, baseball, football and hockey, giving the student a leg up on the competition.

"Sports analytics is one of the fastest growing job types in the market, according to our research. This is a new career path with vast employment potential,” says Dr. Lashbrook.

This article was written by our academic partner, Sports Management Worldwide .

Give your career in sport a boost with the latest live vacancies in Strategy & Research , or create an account today and stay up to date with all the latest industry knowledge, events and jobs in sport.