GAME-CHANGER: Raising a glass to the game changing Football League 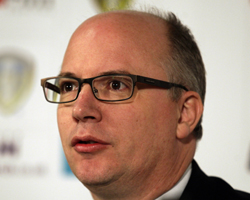 The English Football League has appointed Shaun Harvey as its new CEO just days before the opening of its 125th anniversary season.

While the Football League may be said to live in the shadow of the Premier League from which it became divorced more than two decades ago, the organisation which Harvey, a former CEO at Leeds United, takes over has played a critical role in the history of the world’s most popular sport.

As the world’s oldest football league competition it blazed a trail for the professional game and became the model for leagues around the world.&nbsp;This weekend, as the 2013-14 season gets under way, eight of the 12 founder members of the league will be in action, six of them playing against each other.

In Saturday’s fixtures Bolton Wanderers play a local derby match against Burnley in a game which has definite echoes of that inaugural season. It was a Bolton player, James Davenport who scored the first ever goal in the league on September 8, 1888, when he was on target after only two minutes in his club’s game against Derby County.&nbsp;

Elsewhere, two other founder members, Preston North End and Wolverhampton Wanderers, meet in League 1, the third tier of England’s football pyramid - an indication of how the mighty can fall - while Accrington Stanley, a club which went out of business and was re-born under new management, will be back in action in League 2.

The Football League was a game-changer, not just for football but for professional sport. Professional football had been played in England for years before the league was formed. Although clubs were only formally permitted to pay players in 1885, the reality was that many clubs had compensated players - ostensibly for taking time off work -&nbsp;for many years.

But while clubs needed to pay players to remain competitive, the fixture list consisted of ad-hoc friendlies and the FA Cup which, by its very nature as a knock-out competition, could not be relied upon for income.

The Football League provided the solution -&nbsp;a series of guaranteed and meaningful fixtures played home and away and a major draw for fans.

For much of its history the Football League reigned supreme. It created legends, its clubs became household names worldwide and its champions were the Champions of England. Until the formation of the 20-strong Premier League there were 92 clubs but now, inevitably, the ultimate ambition of the 72 remaining clubs is to leave the league and join the Big Time Premiership.

But as Shaun Harvey takes up his new role it is worth reflecting on the strength of the Football League as a brand. It remains hugely popular, largely because of its history and deep roots within communities across the country.&nbsp;Around the world few first tier leagues are able to match the average attendance of the Football League Championship and each club is supported with a rare passion. This has made it an extremely attractive proposition for sponsors anxious to develop or reinforce a footprint across England.&nbsp;This was achieved particularly effectively by former sponsors Nationwide,&nbsp;which felt the League aligned perfectly with its branch network,&nbsp;and Coca-Cola, which reached out to fans by having its famous logo rendered in the colours of individual clubs.

From this season the sponsors are Sky Bet, a move which reflects Sky Sport’s commitment to live coverage of the league and the importance of betting across the sponsorship sector.

Television coverage is certainly not confined to the domestic market and Football League games are shown&nbsp;worldwide each week giving it unique reach for a competition embracing teams spanning the second to fourth tiers.

And of course there are the Football League promotion play-offs.&nbsp;The system of relegation and promotion which remains a mystery to sports fans in North America is central to the Football League is at the heart of the Football League. It ensures the potential mobility of clubs and guarantees that every season begins with a fresh dream for every fan. That mobility has seen tiny clubs such as Wimbledon rise from the amateur game to top tier status while other small clubs have also risen to the top and fallen back. Such is the stuff of dreams and legends.

The final promotion places in each division are decided by play-off finals at Wembley Stadium where crowds of more than 50,000 are common for the League 2 games,&nbsp;while the ground is routinely close to its 90,000 capacity for the match which decides who goes up to the Premier League, a prize won this year by Crystal Palace.

The Football League is about excitement and unpredictability. Some fans prefer it to the Premier League because, while teams may be less technically adept, they&nbsp;are often more evenly matched. It is often said that this is a league where any tam can beat another on their day.

There are those who argue that the skill level has, in fact, increased over the years as the flood of overseas players into the Premier League has restricted opportunities for young British players, forcing them to step down to the second or even third tiers.

So that’s why ahead of the big kick-off from Accrington to Crawley,&nbsp;Nottingham to Newport, fans will be raising a glass to the Football League...&nbsp;and dreaming of the day their club leaves it behind.