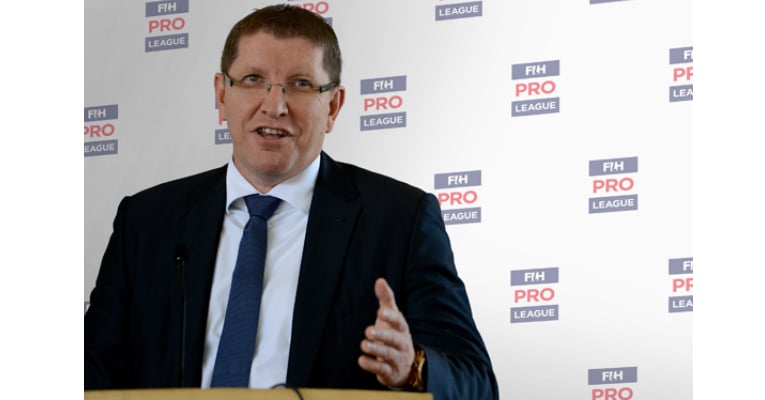 The prospect of leading a growing International Federation into its next phase was enough to draw Thierry Weil’s attention to the position of CEO of the International Hockey Federation (FIH), but it was the enticing three word phrase, “FIH Pro League”, that sealed the deal.


“Someone sent me through details of the FIH Pro League and it captured my imagination,” says Weil during his first interviews as the new CEO.

“This is the first time, in any sport, that international teams will play in a home and away global league. There’s so much that is exciting and challenging about that.”
Thierry Weil, FIH CEO

As a former FIFA employee, Weil is used to dealing with sport on a global scale, but the size of this challenge – to fit all 152 games into a six-month calendar, is as tough as it gets.

Weil pays tribute to the work that has already been done. “This is the first time such a league will be played and that is thanks to the participating National Associations. Believe me, to put a six-month league into an existing calendar is really difficult and needs a lot of collaboration and good will from the athletes, clubs and national leagues, so this is a real testament to everyone’s commitment and goodwill.”

The CEO made sure that the move towards the FIH Pro League implementation had universal approval. To his surprise everyone was on-board. “I had individual talks with the 11 participating nations and I also had meetings with other organisations such as the League Management Panel. All the participating nations are very much in favour and everyone I have spoken to sees the positive in the FIH Pro League. Let’s face it, hockey will be regularly and permanently on television, with the best nations playing each other. That has to be good for the game.”

Three of the qualities that Weil brings to the role are clear thinking, good decision-making and an open mind. He needed all three as he got to grips with the proposals in the early stages. Even for a Federation that has a ‘Revolution’ as its strategy, this was ground-breaking stuff.

“When you come into an organisation and you find something like the FIH Pro League in the planning stage, you have to take a step back and really understand it. You must find out how people view it, are they supporting it? You have to take the time to get a clear view of every angle.”

Despite the excitement surrounding the FIH Pro League, Weil has not lost sight of the other roles central to the FIH. While the World Cup and Olympics are pinnacle events, the Hockey Series is extremely important to the growth and development of the game across the globe.

“We have 137 National Federations and the Hockey Series provides an opportunity for teams that have never played on an international stage before to do so. At the moment we have a number of Associations participating in the Hockey Series Open. We had teams playing in Mexico, for example, who had never been on that stage before, that is fantastic. Regardless of the score-lines – and we had some big scores – they will learn from that and grow.”

This, in turn, will lead to more opportunities for players, coaches and officials. The increased involvement of commercial and broadcast partners will also lead to more social responsibility programmes around the world.

“There are challenges ahead,” says Weil. “Aside from the logistics of initiating a global home and away league, there are all the other opportunities that are presenting themselves at all levels of the game. This means it is difficult to set priorities or take the time to evaluate the steps we need to take.

“But I have been impressed by the commitment and passion shown by all those involved in the game and I am looking forward to the challenge of leading the FIH through this period of growth and development.”

Give your career a boost with the latest live vacancies in the sports industry , or create an account today and stay up to date with all the latest industry knowledge, events and jobs in sport. ​