Electric Olympics: a Guide to the Tech Featured at PyeongChang 2018

This article was originally published by our media partner SportsPro Media . You can read the original article here . 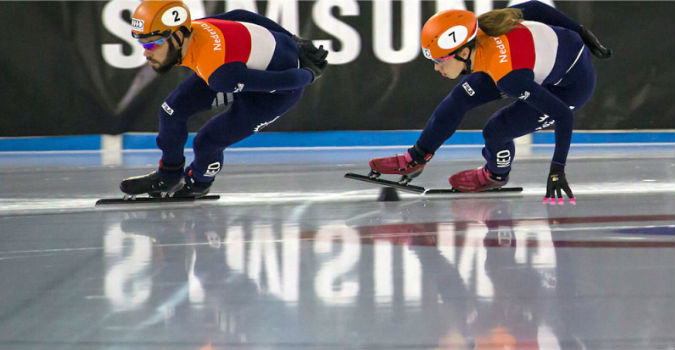 The 2018 Winter Olympic and Paralympic Games in PyeongChang, South Korea, will feature 92 nations taking part in 102 events across 15 sports. The event will showcase an abundance of technological advancements that could see it make history as a step forward in the delivery, consumption and performance of elite sport.

From brand new production techniques to sensor-packed ski suits, the Games look set to show the world what the combination of sport and tech can achieve.

After experimenting with live VR at Rio 2016, OBS will produce over 50 hours of coverage in the format from South Korea, powered by Intel’s TrueVR system and Intel 360 Replay and created with the help of drone cameras. Eurosport and NBC will both be distributing the coverage to viewers in Europe and the US respectively.

Archive footage of the content is to be stored in the cloud, with live and on-demand footage distributed across platforms including Google Daydream, Samsung Gear VR and Windows Mixed Reality, as well as through each broadcaster’s apps and digital offerings.

Olympic Broadcasting Services (OBS) and Japan’s state broadcaster NHK are partnering to allow PyeongChang to be the first Games with elements screened live in 4K Ultra HD resolution . The opening ceremony, ski jumping, figure skating and snowboard big air will be shown using the new broadcasting format, and will be distributed by NBC in the US.

During the 4K Ultra HD broadcasts, TV images are captured in the specifications of the latest 4K TVs and in high dynamic range (HDR), which shows a much larger range of colours than was previously possible. These broadcasts will also be accompanied by Dolby Atmos three-dimensional sound.

OBS and NHK will also be continuing their tests in 8K Super Hi-Vision , following a successful pilot scheme at Rio 2016 . Screenings will be restricted to a special showcase at the International Broadcast Centre (IBC) in PyeongChang and to private viewings in Japan, but with national satellite transmissions of 8K planned for Japanese audiences in time for Tokyo 2020, and the format lending itself well to larger venues such as cinemas, several Olympic broadcasters are understood to be taking the test feed.

The IOC's official timekeeping partner, Omega , is providing technology that can track every movement of the athletes competing on the ice and snow. 300 motion sensors will be attached to competitors’ uniforms and equipment that will collect a range of data including their instant speed, distances covered, movements, and angles, which can then be sent live to TV stations and provide viewers with an improved understanding of each event as it unfolds.

The technology will be fixed on to the boots of skiers, the sleds of bobsleigh athletes and the skies of ski jumpers and freestylers, the boards of snow boarders and the uniforms of hockey players. It will allow fans to appreciate how fast skiers are racing and the trajectory and acceleration on the track by, for example, bobsled competitors, and will be useful for athletes to analyse their own performances.

Intel will also be delivering the first broad-scale 5G mobile network at an Olympics, in collaboration with KT Corporation.

5G promises broadband speeds up to 100 times faster than the current 4G standard, with phones able to load webpages in a millisecond, and it can carry more data with a lower latency. This will allow fans with compatible devices to use on-site 5G-powered experiences, including live 360-degree video streaming, VR and AR. These features, which require large amounts of bandwidth, will enable spectators to control their own instant replays of events or select different viewpoints or angles for the sporting moment they wish to see. It is also providing the communications needed to operate self-driving buses.

Among 5G’s capabilities is also the capacity for enabled devices to communicate with each other, creating ‘contextual awareness’ that allows networks to automatically adjust capacity to meet changing needs.

KT and Intel will also be providing a real-time 5G video system on the Alpensia ski slope, where skiers wearing GPS receivers that plot their exact positions, as well as wireless transceivers, will send back real-time video of their perspective.

Chinese ecommerce, retail and tech giant Alibaba will be supporting its first Olympics as an IOC TOP partner, after agreeing a nine-figure deal in January 2017 . As the cloud services and ecommerce provider of the Games, it will be using its cloud-based technology to enhance the fan experience by providing facial recognition payment systems, travel guidance and enhanced content creation capabilities for fans, athletes and the media.

The company will be trialling its facial recognition technology at PyeongChang as a part of a plan to upgrade ticketing, media and video services over the next decade.

Alibaba will be hosting back-end systems on the cloud to see if these can be reused from Games to Games and enhance cost efficiency, where local data and IT services would no longer need to be built from scratch ahead of a new event.

South Korea has been developing applications in artificial intelligence (AI), and will be showcasing 85 robots across the event’s venues, which will assist visitors in navigating the venues and Games schedules and offer tourist tips. 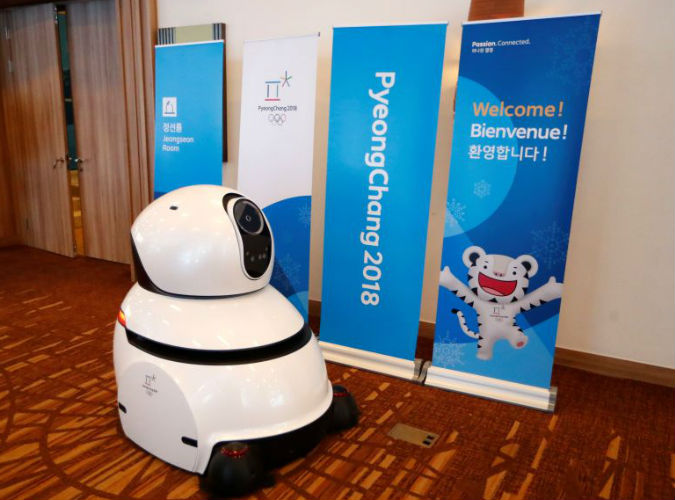 A cleaning robot in action ahead of PyeongChang 2018

In addition, the AI firm Future Robot will have 30 Furo-D robots which will be able to answer questions in multiple languages, and interact with users to take photos using a large touchscreen.

Travel is always a major challenge at the Winter Olympics, with key venues in mountain sites and resort hosts often based long distances from urban centres.

In November 2016, the South Korean government announced the completion of a US$3.8 billion Korea Train Express (KTX) line which links Seoul to PyeongChang. The trains travel at 300 kilometres per hour, bringing the journey time down from three hours by road to a mere 69 minutes.

PyeongChang will also be providing driverless buses provided by telecommunications company KT, will utilise the 5G internet services at the event. The vehicles will incorporate screens instead of windows showing live video from around the venue’s sporting arenas.

Equipment has always played a central role in winter sports, with development and innovation helping elite athletes to find the added seconds or technical refinements they need to succeed.

South Korean technology company Samsung have kitted out two Dutch speed-skaters, Suzanne Schulting and Sjinkie Knegt, with suits containing sensors that send real-time data about their body positions to their coaches’ smartphones. An app then analyses the athletes’ racing posture and suggest improvements that are fed back to the skaters via predefined haptic vibration signals to a band on the their wrists. For the moment, the Samsung SmartSuits will only be used during training runs, since deployment during competitive racing would constitute digital doping.

Developed by Canadian entrepreneurs Andrew Flemming, Geoff Fowler and Will Hamilton to improve training for curling, which sees teams strategically manoeuvre granite rocks across the ice, the SmartBroom has been sold to 13 national curling federations sending teams to PyeongChang. Team Canada utilised the technology ahead of Sochi 2014, which saw both men’s and women’s team claim gold medals.

The act of sweeping during curling increases the temperature of the ice while creating micro-scratches on the surface, allowing players greater control over distance and trajectory of their rocks. Competing theories over sweeping have seesawed an emphasis on a higher stroke rate or the use of greater force and more angled body positioning. The SmartBroom, which is used in training ahead of the Games, has four sensors that relay data to a small display unit that can measure brush stroke speeds, force and angle of the athlete and presents the results using a ‘Sweeping Performance Index’ or SPI that can help to inform each team’s strategy.

Safety is also a primary concern in Winter Olympic disciplines, not least those which combine high speeds with hard surfaces. First developed to reduce the impact of riders falling on tarmac during MotoGP motorcycle races, Dainese airbags will be worn by a number of competitors at the Games. The devices are incorporated in vests that feature seven sensors which can detect when the user is losing control and a crash is imminent, causing the airbags to inflate to protect the athlete.

Multi-directional impact protection (MIPS) helmets have ball-and-socket style slip panes that work to reduce rotational movement experienced upon the angled impact of a high-speed crash - useful in particular for protecting downhill skiers, who can achieve speeds of up to 90 miles per hour. The outer layer of the helmet features a ‘hammerhead’ design that aims to reduce the impact of colliding with the slalom gates.

Intel is delivering two gaming experiences at PyeongChang as part of an effort by the IOC to target a younger audience. In the week leading up to the opening ceremony, the company used its Intel Core i7 gaming processor to power an instalment of its Intel Extreme Masters tournament in StarCraft II, with the action accessible on the Olympic Channel’s digital platform. The competition was played for a prize pool of US$150,000, and was won by Sasha ‘Scarlett’ Hostyn of Canada.

Intel will also provide interactive gaming throughout the Olympic Village for attendees and athletes, with kiosks featuring the official Olympic video game title, Ubisoft’s Steep: Road to the Olympics.

Give your career a boost with the latest live vacancies in t he sports industry , or create an account today and stay up to date with all the latest industry knowledge, events and jobs in sport.